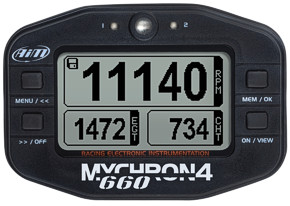 MyChron4 660 is a modular, expandable system: a most complete instrument to sample, view and record all data concerning your dragster.
As a standalone unit, MyChron4 660 records Engine RPM, Wheel Speed in MPH (calculated by jack shaft RPM and final drive ratio), Exhaust Gas Temperature, Cylinder Head Temperature.
CVT and overdrive percentage are product of engine RPM and jack shaft RPM.
It also provides linear g-force as a derivative of wheel speed or rate of acceleration.
Each channel is recorded 50 times per second (50Hz).

Being a modular system, MyChron4 660 can supply beginners with the essential information as well as pro’s with the most detailed and sophisticated data, thanks to the connection to GPS and/or LCU-ONE Lambda controller, Data Hub and Data key.

MyChron4 660 +
GPS05 Module
GPS module connected to MyChron4 660 permits to log the real vehicle speed, which can be usefully compared (for example) to wheel speed, together with in line acceleration. And, last but not least, you can review your driving performance through real images of the strip, exporting all these data into Google Earth ®!

MyChron4 660 +
LCU-One Lambda Controller Thanks to LCU-One wide band lambda controller, MyChron4 660 can also record lambda values, assuring the best carburetion and tuning of your engine, a key element to reach and constantly keep your dragster performance at the top.
LCU-ONE can detect punctual Lambda value from 0.65 to 1.6, offering you an extremely precise measurement.

Data Key
Moreover, all of the data is easily downloadable to your PC thanks to Data Key, a compact interface that collects data from MyChron4 660 after the tests or the run and transfers them to the PC through the USB connection, ready to be analyzed.These information can then be analysed using QMAn, the powerful software properly developed by AiM for this logger, which lets you create your personal ET database and analyse performance data.
QMAn is the latest generation specific Drag Racing Software, providing histograms, scatter plots, colored 3D plots: a software developed to be even more user friendly, minimizing the number of clicks to get immediately the information you need.

The MyChron4 660 is a modular, expandable drag racing system used to sample, view and record all data concerning your dragster.

Being a modular system, the new MyChron4 660 expands the already huge range of features which made MyChron3 660 the most powerful datalogger and gauge specifically designed for jr. drag racing. MyChron4 660 of course keeps the winning features of the former product:

MyChron4 660 includes by default an RPM display stabilizer automatically invoked below 5000 RPM. The RPM stabilizer will slow and average the engine RPM on the display. The result is a much more steady and consistent number for your carburetor tuning, as you can see in this clip (wmf file).

In the real time view the Engine RPM's are displayed as large digital numbers, smooth and steady. You can also see both your cylinder head temperature and your exhaust gas temperature, labeled EGT and CHT. Lambda value can be checked too for 10" as an alternative to CHT, simply pushing a button.

Built in Clock and Calendar

MyChron4 660 has also got a clock and calendar to time and date stamp every run. As evolution of MyChron3 660, MyChron4 660 makes further steps to allow a deeper and deeper evaluation of your Jr. Dragster behaviour:

With MyChron4 660 you'll get a clear graphical display of RPM and jack shaft, as well as Exhaust Gas and Cylinder Head Temperatures, and even CVT, Overdrive channels and calculated wheel speed in MPH.

The MyChron4 660 is legal in NHRA competition.

Use of additional sensors by way of expansion modules may not be legal during NHRA official testing or competition. Please consult your rulebook or check with your club or sanctioning body before adding expansion modules, such as lambda.